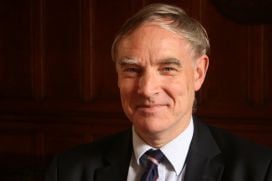 This lecture will be about some of the evidence of behaviour of soils under complex, cyclic loading conditions, and the ways that this behaviour can be modelled so that it can be incorporated into analysis and design. Although “cyclic loading” is used as a convenient shorthand for describing many types of problem, in reality the loads often consist not just of many similar cycles, but of pseudo-random loading of widely varying amplitudes and frequencies. Our task is to understand how these loadings affect soil behaviour, and how they can be described theoretically. The motivation for this work comes from the design of foundations for offshore wind farms around the UK, but the applications are much wider, including for instance earthquake loading.

During “cyclic loading” soils can undergo changes of stiffness, strength and “damping”. These effects can depend on loading rate and past history as well as load amplitude. When the loading is biased in one direction, “ratcheting” displacements may accumulate. After cycling, the monotonic response may differ from the pre-cycling response. Evidence for these different aspects of behaviour will be discussed, and methods for modelling them outlined, with an emphasis on practical methods for design.

After studying for his PhD under the late Professor Peter Wroth at Cambridge, Guy Houlsby followed an academic career at Oxford University. From 1991 till his retirement in 2020 he was Professor of Civil Engineering at Oxford, and was Head of the Department of Engineering Science from 2009 to 2014.

He is an internationally recognised expert on geotechnical engineering, where his main interest is in offshore foundations. Applications include structures for the oil and gas industry, but more particularly in recent years for offshore wind turbines. He also works in theoretical soil mechanics and plasticity theory, developing a rigorous thermodynamically-based approach to constitutive modelling. His current work brings together these two threads of work, developing models for cyclic loading of foundations for offshore wind turbines.

He regularly lectures in the UK and abroad, and in 2014 gave the Rankine Lecture on “Interactions in Offshore Foundation Design”, invited by the British Geotechnical Association. He acts as a consultant in civil, geotechnical and offshore engineering.

His first degree and PhD are from Cambridge University. In 2003 he was awarded a DSc degree by Oxford University. He is a Fellow of the Institution of Civil Engineers and of the Royal Academy of Engineering.